The new Webb images, taken by its two cameras — the Near Infrared Camera and the Mid-Infrared Instrument — as part of the Cosmic Evolution Early Release Science (CEERS) survey, show what may be among the earliest galaxies ever observed. One of these galaxies, dubbed the Maisie’s galaxy, is being observed as it was just 290 million years after the Big Bang, which corresponds to a redshift of z=14.3. 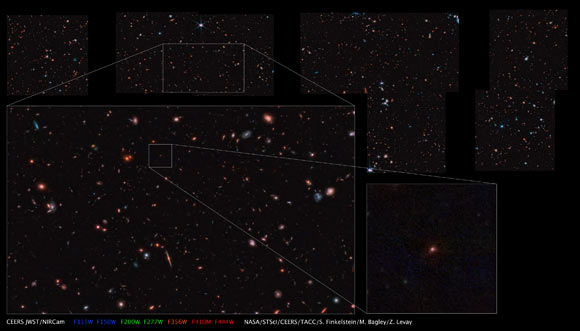 This image from Webb’s Near Infrared Camera (NIRCam) shows the Maisie’s galaxy, one of the earliest galaxies ever observed; if its estimated redshift of 14.3 is confirmed with future observations, that would mean we’re seeing it as it was just 290 million years after the Big Bang. Image credit: NASA / STScI / CEERS / TACC / S. Finkelstein / M. Bagley / Z. Levay.

“The study of galaxy evolution is the ultimate human origin story — not just how did our species, planet or Solar System come to be, but this field seeks to answer how our Milky Way Galaxy came to be,” said Dr. Steven Finkelstein, an astronomer in the Department of Astronomy at the University of Texas at Austin and the principal investigator for the CEERS survey, and his colleagues.

“One method to study our Galactic origins is to study the earliest building blocks of the Milky Way by searching for and analyzing galaxies forming in the early Universe.”

“The advent of the Wide Field Camera 3 on the NASA/ESA Hubble Space Telescope pushed our cosmic horizons well into the epoch of reionization, the time when energetic photons — presumably from massive stars in early galaxies — ionized the gas in the intergalactic medium.”

“These studies found that the z=6-10 Universe is teeming with galaxies, with thousands of galaxy candidates known, including spectroscopic confirmations out to z ~ 11.”

“Part of the difficulty of such studies is the near-heroic observational effort needed to study galaxies at z ~ 10 with Hubble.”

“These galaxies become more and more difficult to see with this 2.4-m ultraviolet/optical/near-infrared telescope, and at these high-redshifts they become single-band detections, leaving the z ~> 11 Universe opaque to our understanding.”

“This all changes with the advent of the NASA/ESA/CSA James Webb Space Telescope,” they said.

“The dramatic increase in light-gathering power coupled with the infrared sensitivity makes this telescope the ideal machine to push our cosmic horizons to the epoch of the first galaxies.”

“As the first Webb images arrive it is natural to wonder what these early data tell us about the rise of star-formation in the early Universe.”

The new images from Webb reveal a flurry of complex galaxies evolving over time: some elegantly mature pinwheels, others blobby toddlers, still others gauzy swirls of do-si-doing neighbors.

The images are from a patch of sky in the constellation of Ursa Major. This same area of sky was observed previously by Hubble, as seen in the Extended Groth Strip.

“It’s amazing to see a point of light from Hubble turn into a whole, beautifully shaped galaxy in these new James Webb images, and other galaxies just pop up out of nowhere,” Dr. Finkelstein said.

The large image from Webb’s Near Infrared Camera (NIRCam) is a mosaic of 690 individual frames that took about 24 hours to collect.

This image covers an area of the sky about eight times as large as Webb’s First Deep Field image, although it is not quite as deep.

“High-performance computing power made it possible to combine myriad images and hold the frames in memory at once for processing, resulting in a single beautiful image,” Dr. Finkelstein said. 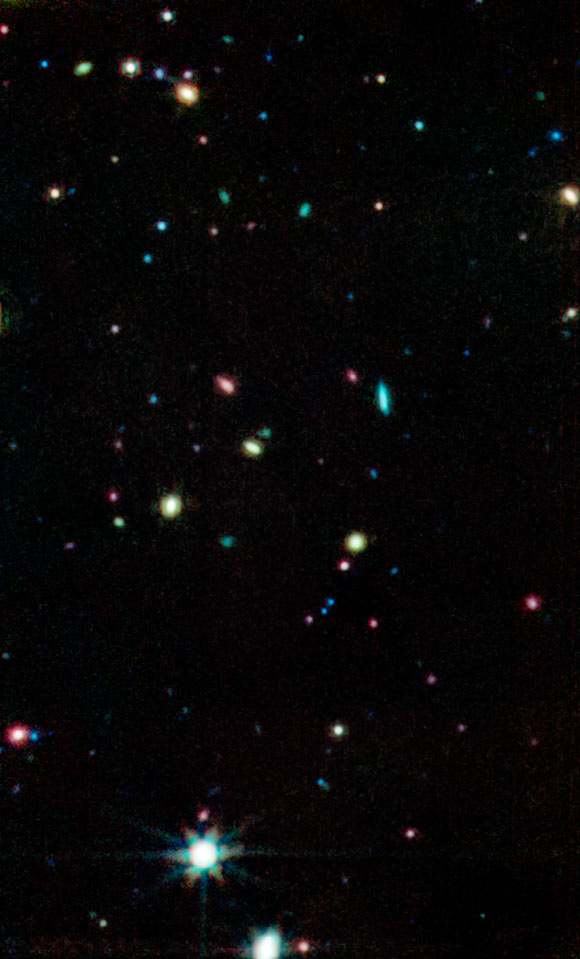 The other image was taken with Webb’s Mid-Infrared Instrument (MIRI).

Compared with NIRcam, MIRI has a smaller field of view but operates at much higher spatial resolution than previous mid-infrared telescopes.

“These images are exciting because the sheer number of these really high redshift galaxy candidates is larger than we expected,” said Dr. Jeyhan Kartaltepe, an astronomer in the School of Physics and Astronomy at the Rochester Institute of Technology and co-investigator of the CEERS survey.

“We knew we’d find some, but I don’t think anybody thought we’d find as many as we have.”

“It either means the Universe works a little bit differently than we thought or there’s a lot of other contaminating sources and these candidates will turn out to be something else. The reality is probably a mix of both.”

The team’s work will be published in the Astrophysical Journal.

The history and challenge of grassy biomes | Science