This review was adapted from a piece that ran on “Murina” when the film premiered in Cannes in July 2021.

The last few weeks in the United States have lent resonance to a current in international films that’s been growing over the past couple of years – stories of young women trying to find places for themselves in environments that afford them little or no agency in their own lives. The films have nothing to do with Roe v. Wade, but from the recent Cannes period drama “Corsage” (a royal woman chafing under physical and societal constraints) to the unsettling Costa Rican film “Clara Sola” (which puts a mystical spin on the awakening of female power) the movies can feel timely to viewers that see their own boundaries narrowing.

First-time Croatian director Antoneta Alamat Kusijanovic’s “Murina,” which won the Camera d’Or as the best first film at Cannes in 2021 and comes to U.S. theaters in July, is a father-daughter conflict that plays in a shiny and upscale setting. In recent years, young female directors from the Balkan states have made a string of impressive films haunted by the wars that consumed that region in the 1990s — among them, Blerta Zeqiri’s “The Marriage,” Antoneta Kastrati’s “Zana” and Jasmila Zbanic’s “Quo Vadis, Aida?” — but Kusijanovi stays away from the reverberations of those conflicts; she’s more concerned with the wars within the family.

Julija (Gracija Filipovic) is a teenage girl who lives on an idyllic coastline where her father (Leon Lucev) owns land that he’s hoping to sell to Javier (Cliff Curtis), a wealthy former employer and sometime friend. If Javier buys the land, it’ll be the big score that allows the family to move to Zagreb – but any potential stumble could be catastrophic. Domineering and under tremendous stress as the potential sale approaches, her father barks orders at Julija and her mother, Nela (Danica Curcic); mom goes along and makes excuses for his behavior. 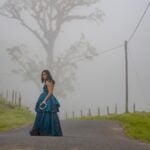 “If he gets money, he’ll be worse,” says Julija, who wears a perpetual look of sullen annoyance that seems entirely warranted every time her father opens his mouth.

In that setting, the urbane Javier seems to Julija to be everything her dad is not: open-minded, encouraging of her desires to leave her constricted life, supportive rather than dismissive. It isn’t that simple, of course, and every character has his or her turn to be the guilty party in this round-robin warfare that can get exhausting and repetitive.

But “Murina” also gives Filipovic room to shine as Julija, and it uses the blue ocean and sun-dappled shores to paint a vivid picture of a troubled paradise, with a lot of help from the dreamy compositions of cinematographer Hélène Louvart. 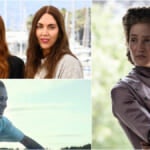 The film also gives its heroine a pair of dramatic signposts on her travels — the opening one-shot from beneath the surface of the ocean looking up toward the sky, the final one-shot from far above looking down at the surface. Does the sea offer Julija escape, or simply a pretty distraction before she inevitably returns to a darker life on shore? Kusijanovic isn’t interested in tipping her hand as this coming-of-age story turns into one more cinematic journey by a young woman through an inhospitable world.

Share
Previous Hugh Grant Could Play Prince Andrew?
Next How to Watch ‘Where the Crawdads Sing’: Is the Adaptation Streaming?